Studios Are Rushing to Record Music in Hi-Def Surround Sound

For the past two years, Sylvia Massy has spent more than $100,000 upgrading her recording studio, The Oddio Shop in Ashland, Ore., with numerous speakers on the ceiling, a “constellation of monitors,” a $10,000 recording interface called the Antelope Galaxy 64 and high-end German cables so she can mix tracks using the deeper, richer sound technology Dolby Atmos. “We went for the best equipment we could possibly get,” she says. “Which was a little nutty. Big job.”

Eighty percent of Massy’s clients, including Brazilian singer-songwriter Amon Tobin and Des Moines, Iowa-based King Bartlett & The Royal Band, now employ the immersive surround-sound audio format, which is available for streaming on Amazon Music and Apple Music (combined with a complementary format called Spatial Audio). This sound technology has been available for years from high-quality-audio streaming services like TIDAL and in movie theaters, but it has surged since 2019: Most of today’s hits, from Lizzo’s “About Damn Time” to Jack Harlow’s “Dua Lipa,” plus classics like Tom Petty’s Wildflowers & All the Rest and catalogs from Katy Perry, J. Cole, The Doors and others, are mixed or remixed this way; the number of Amazon Music tracks mixed in immersive-audio formats has grown over 400% during that time.

For engineers and studios, it may be just the beginning. “I’m excited about the applications of this type of listening in clubs and cars and home systems,” Massy says. “For some of us studio owners, we’re not going to wait till it catches on.” At Los Angeles’ Larrabee Studios, producer-engineer Manny Marroquin has spent the last few years revamping his mixing room with a high-end Dolby Atmos system including nine speakers carefully placed around the room, five subwoofers and four overhead speakers, all hidden behind fabric to seem unobtrusive. “Apple opened the floodgates so we could all start experimenting with it,” says Marroquin, who has worked with Bruno Mars, The Rolling Stones and many others. “The tidal wave is too big to ignore. You’re going to have to learn how to swim.”

TIDAL and Amazon Music first made tracks available through Spatial Audio three years ago, and last June, Apple Music offered thousands of tracks mixed in the format — Apple and Amazon do not charge extra for the higher audio quality, while TIDAL’s monthly cost for the immersive format is $20, compared with $10 for standard stereo. (Conspicuously, Spotify and YouTube remain stereo-only.) Eddy Cue, Apple’s senior vp of internet software and services, called the new technology — ideally heard through the company’s latest AirPods or a multispeaker home-theater system — “a real game changer.”

The new formats have changed the way artists, engineers and studios work: In March 2020, according to Dolby, just 30 studios were equipped for mixing in Dolby Atmos, but today the number is nearly 600 — a 1,900% increase. “A massive rate of adoption,” says Christine Thomas, Dolby’s senior director of music partnerships.

Since Apple Music and Amazon Music almost simultaneously announced they would be offering the immersive-audio streaming to subscribers for no added cost in May 2021, they’ve used the technology as their latest weapon in the streaming wars. Spotify, noticeably, failed to roll out its own hi-fi streaming plans promised last year; in January, the company said the program has been delayed without new “timing details to share yet.”

Meanwhile, whether or not high-quality audio attracts meaningful numbers of new subscribers, Apple and Amazon are pushing it to artists and fans alike with editorial playlists and marketing. (The companies have the added bonus of selling more Spatial Audio-equipped AirPods and Dolby Atmos-friendly home-theater equipment.) That means mixing for Atmos is becoming increasingly in-demand and studios see it as an important new service — one they don’t want to risk missing out on. Massy’s studio, which works with many independent musicians, charges roughly $350 per track for a “Mastering for Atmos” mix, usually in addition to the initial $1,200 stereo mix. And major labels are all-in on the new formats, sometimes ushering artists to their own studios, like Universal Music’s Abbey Road in London and Sony’s Battery in New York.

For artists, the financial benefit is more prominent placement on streaming playlists, which spotlight the services’ high-definition audio. “We tell the artist to submit to Apple Music so they can get on the Atmos playlists,” says Chris Johnson, manager of The Oddio Shop. “It’s a good boost, for sure.” On Apple Music’s homepage, “Spatial Audio” is listed as a top category among rock and hip-hop, and most of Apple Music’s global Top 100, from Kendrick Lamar to Morgan Wallen, is mixed this way. “A bunch of [digital service providers] are clearly believing Spatial Audio adds value to the streaming service,” says a major-label executive. “We want to support that.” 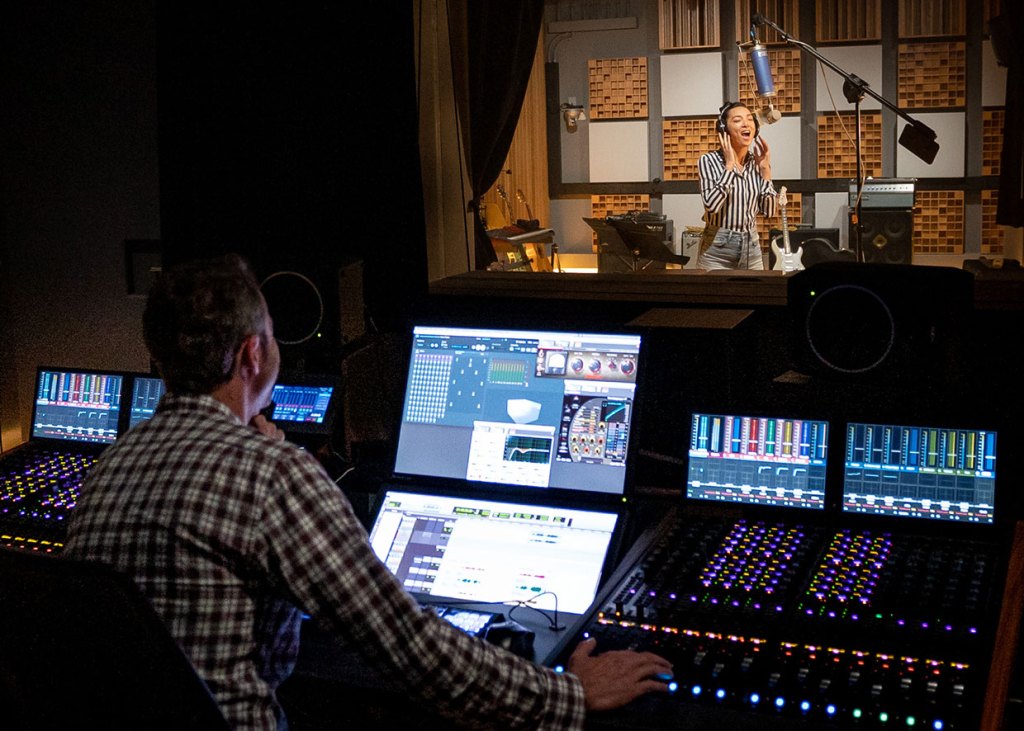 Tracks remixed in Spatial Audio and similar formats have a depth that isn’t comprehensible in stereo recordings. Heard on Apple Music, the “hey, ho!” chants in the Ramones’ “Blitzkrieg Bop” sound like they’re all over the room rather than coming from a central microphone; the synths in Bad Bunny’s “Moscow Mule” appear to call and respond to the vocals like a symphony. Tony Gervino, TIDAL’s executive vp and editor in chief, learned from the newly remixed version of Roberta Flack’s 1973 classic “Killing Me Softly With His Song” that percussion noises came from a gospel choir, as opposed to what he assumed were instruments. “If you can hear the people recording it while they’re recording it, there’s emotion you really can’t replicate,” says Gervino, a former top editor at Billboard.

“It definitely should sound like ‘here’s my mix’ and ‘here’s my mix on steroids,’” adds Emily Lazar, founder and chief mastering engineer at New York studio The Lodge, who won a Grammy Award for working on Beck’s 2017 album, Colors, and has worked with Foo Fighters, Coldplay and others. “It should have an element of that experience and movement and excitement.”

Enthusiasm for the immersive formats has spread from room to room at studios. Joan Jett recently mixed her upcoming acoustic album in Dolby Atmos, as well as a competing sound technology, Sony 360, at The Hit Factory/Germano Studios in New York, which upgraded its Studio 1 for these formats over the past few years. When artists and other potential clients toured the studio while Jett and her team were recording earlier this year, the veteran rock star played the mixes and talked them up.

“That would energize the whole situation,” says Tony Germano, the studio’s owner and president. “Someone walks out and thinks about immersive audio in a whole new way.”

As the new formats dominate studios, engineers and producers are pitching artists directly.

Alex Solano, owner of Alex Pro Mix, emails potential clients about hiring him to upgrade their mixes. To the veteran engineer, Dolby Atmos and the other formats are finally pushing back against years of compressed audio files and poor sound quality. “The consumer has been accustomed to listening to MP3s for the last two decades — that has changed,” says Solano, adding that Dolby Atmos mixes and masters cost roughly one-and-a-half times the stereo mix. “If music creators and producers don’t adapt to this technology, they’re going to be left behind.”

The Spatial Audio format, which Apple Music pairs with Dolby Atmos for the surround sound experience on AirPods and high-end stereos, is not popular with all top engineers. Ronan Chris Murphy, a producer and engineer who has worked with King Crimson and GWAR, has blogged and posted YouTube videos suggesting the new formats are reminiscent of stereo-store tricks in which salespeople simply crank up the bass to get consumers to buy new speakers. Referring to a beloved classic album, which he won’t name, he says: “When I switch on headphones between the original mix and the Spatial Audio mix, it just sounds terrible.

“It might have sounded fantastic in a 17-point system at the studio,” he adds, “but the fold-down” — listening to music recorded with many channels on an audio system with fewer channels — “sounds like a bad demo tape.”

Murphy is also critical of Apple’s early marketing, using phrases such as “Beyond Stereo,” when his own A-B comparisons between stereo remasters and Spatial Audio mixes suggest something less than revolutionary. He also complains that many of the new mix engineers did not work with the original artists and producers who “maybe slaved over them for three weeks.” Says Murphy: “I don’t understand why the music industry isn’t revolting against all of this.”

Dolby senior vp of entertainment John Couling counters that the new formats inherently give recordings more depth and clarity, as top studio adopters such as producers No I.D., FINNEAS and Bob Clearmountain have pointed out over the past year or two. “You don’t have the conflict of the guitar and the vocal on top of each other anymore,” Couling says. “You can separate them.”

The most potent evangelists for the new formats, though, are the artists themselves. Sabrina Claudio, an R&B singer-songwriter, recorded her latest album, Based On a Feeling, at Marroquin’s Larrabee Studios with the idea of mixing the tracks in Dolby Atmos.

“When you sit in the middle of the room and close your eyes, you can hear the strings going around in a circle. It feels like you’re in a whirlwind that you can’t hear in your normal stereo headphones,” she says. “I get lost in music even more than I have in the past. It’s going to change the industry.”